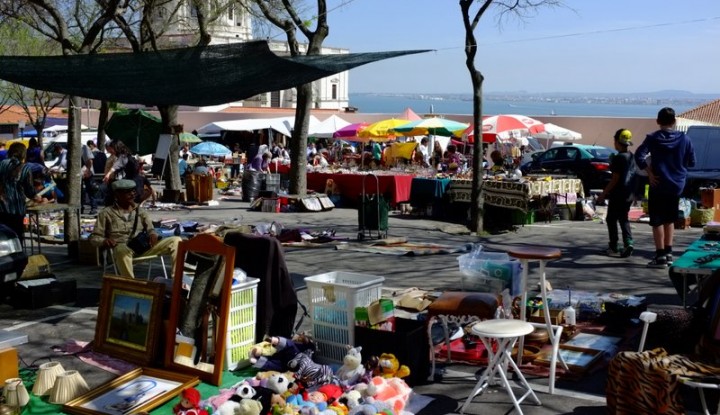 It’s 19:00, and there are white vans parked all over Campo de Santa Clara. If you peek inside you will probably find someone sleeping or eating there.

No, these are not homeless people, but the flea market vendors of the Feira da Ladra, Lisbon’s most famous flea market, who stay overnight to make sure they get the best parking spot to unload their items on the next day. Some have been selling at the Feira da Ladra for 30 years, others have just started selling a year ago. “Business has seen better days, there are more people looking than buying” – many of the vendors complain. In spite of that, they choose to come back because they’ve become used to the routine.

As the sun rises over Lisbon, more and more people join in and start uncovering their goods. They anxiously count down to 7 am, which is when flea market vendors are legally allowed to start setting up their stalls, while they get their coffee fix at the “Panteão”, a cafe located just around the corner of the Campo de Santa Clara. As a matter of facts, flea market vendors of the Feira da Ladra used to set up their booth even earlier than 7 am. However, after a few neighbors complained about the noise in the morning, they were forced to come down at 7 am. And they still feel somehow resentful about that. After all, when it comes to selling at the flea market, every minute counts! And the earlier, the better. 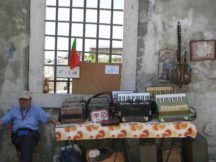 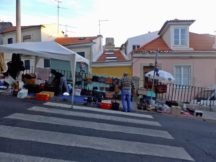 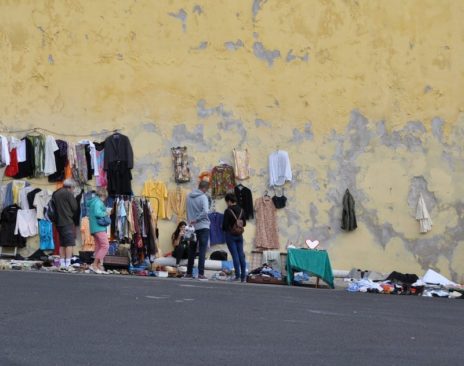 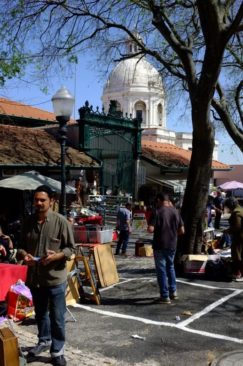 From proper stalls to a simple blanket stretched out on the floor, there are many ways vendors choose to display their items. Overall, it takes them an hour to get everything up. There are designated areas for books, clothes, CD’s and iPhone copycats. The experienced vendors are now joined by younger folks, who take this opportunity to showcase their art or sell some of their old clothes. And even if you’re in the rush to go to work, it’s almost impossible not to take a moment to admire the paraphernalia of objects that take over this Lisbon hill on Tuesdays and Saturdays. 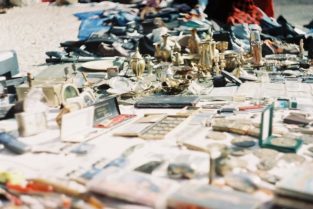 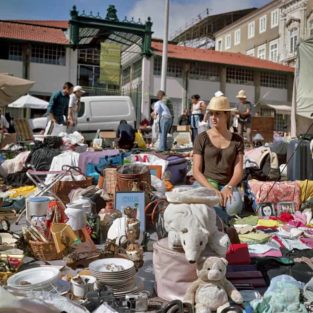 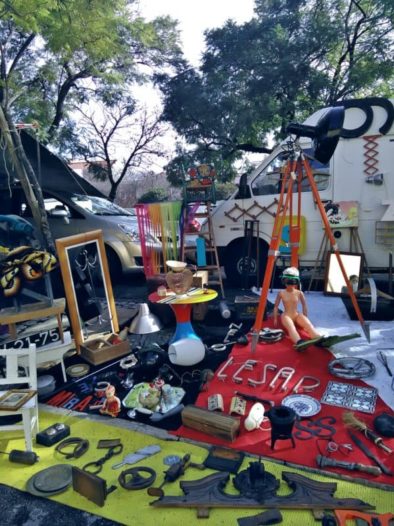 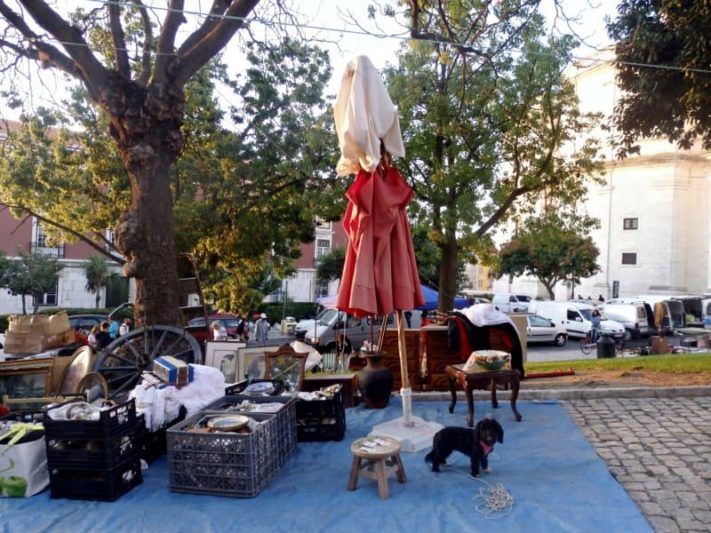 Though most stuff remains pretty much the same every week, now and then there is a piece that will draw your attention. Whether, it’s a 1970’s Hohner clavinet or a baby trolley from the 1920’s. If you’re keen on getting it, approach the vendor as soon as possible, since it’s very likely it will be gone fast.

It may take some time to find your precious item, but the walk around the market is definitely worth it as you get to admire the Tagus river in the distance and get a close-up shot of the Pantheon. A stunning white building where many Portuguese personalities are buried, including the famous Fado singer, Amália Rodrigues. Amália mentions the Feira da Ladra in one of her songs, and many other singers quote their flea market experiences in their lyrics, turning the Feira da Ladra into a significant part of Lisbon history. After all, it is the oldest market in the capital and there is proof of it being mentioned way back in the 17th century!

Nowadays, there are more tourists hunting down bargains at the Feira da Ladra, than locals. Even with their lack of Portuguese, they can still gesture how much they’re willing to pay, which according to the vendors can go all the way down to 20 cents! 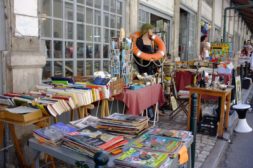 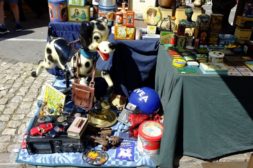 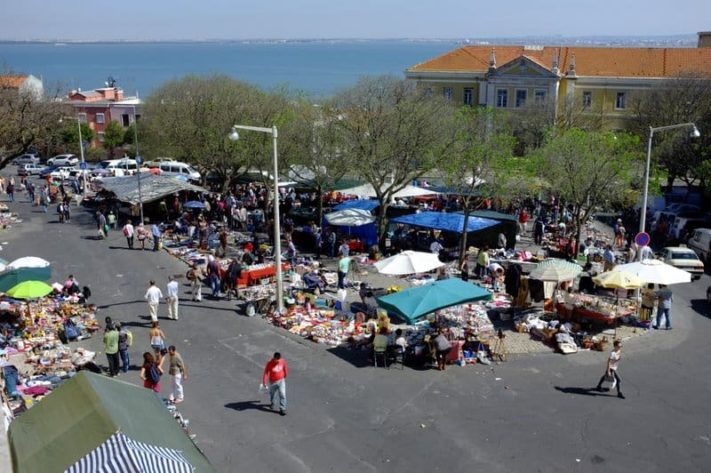 At lunch, vendors take turns taking care of their neighbors’ stall, while buyers settle down at a cafe nearby. If the weather is nice, it’s worth checking if “Clara Clara”, a green kiosk set inside the Botto Machado garden that serves homemade cake and delicious toasts, is open. On Saturdays, visitors can also find near the Campo de Santa Clara, an organic market which sells fresh fruits and vegetables from local producers.

Some of the vendors of the Feira da Ladra, choose to leave after lunch. But others might stay until 7 pm, depending on the weather and the crowd. At this point, there is barely anyone left. The streets are now filled with plastic bags, newspapers and old shoes, which eventually are taken by the garbage crew. And in a matter of hours the mess is gone, and the Campo de Santa Clara is once again back to its original quiet state. Until the next flea market…

Where: Campo de Santa Clara, Alfama
When: The market is held every Tuesday from 6 a.m. to 2 p.m. and Saturday from 6 a.m. to 5 p.m.
How to get there: Tram 28 or walking (best, since you get to discover the beautiful narrow streets of the Alfama district)

Joana always had an eye for vintage things. She loves looking at old cameras, wearing her grandmother's clothes and going to Classic Car shows. An avid traveller, she is currently based in Lisbon, where she works as a Content Editor. She recently started a travel blog called City Odes where she writes about her adventures in Portugal and around the world.

8 (and a half) Flea Market Shopping Tips

Flea Market in Your Pocket: 3 apps to sell and buy vintage Furniture and Home Decor 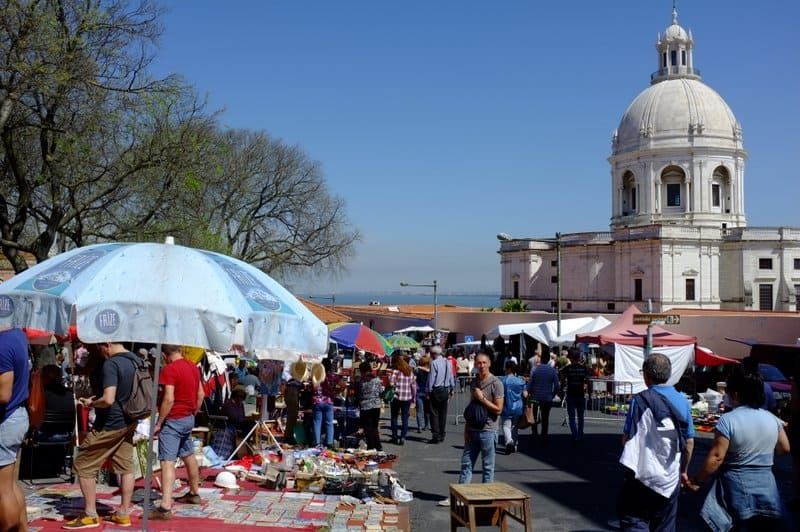 If you’re on the look out for a good spot to go flea market shopping while traveling to Lisbon, just ask…